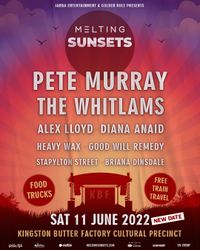 Grab your friends and get along to this one-day music festival with a stellar line-up of Australia’s hottest artists performing live onstage. It’s on at Logan City’s newest and largest outdoor event space, the redeveloped and historic, Kingston Butter Factory Cultural Precinct.

Melting Sunsets is an ultra-modern music festival set in a beautiful and natural parkland space. It features state-of-the-art facilities where audiences can access smart poles for precinct-wide Wi-Fi connection. The event runs into the night from 1pm with plenty of food trucks and bars on-site to satisfy everyone’s thirst and appetite.

Headlining the inaugural event will be none other than Multi-platinum selling Pete Murray, who has released 7 albums over an impressive career and is one of only a few Australian artists with over 1 million album sales under his belt. He has received 17 ARIA nominations throughout his career. Pete’s first three albums all reached #1 on the Australian music charts and his first album FEELER reached number 1 and remained in the Top 100 for two and a half years.

Joining Pete will be none other than Australian Favourites, The Whitlams who will be looking forward to bringing their full band back on the road for what is set to be an unmissable set list.

Along with two of Australias most prominent singer songwriters, Alex Lloyd who is celebrating 20 years of his hit song, Amazing and the wonderful, Indie alt-rock Diana Anaid and her band blasting her powerful tunes out for everyone to sing along with .

But there is so much more! Attendees will be treated by some of the most incredible local talent with funk lords from the Gold Coast, Heavy Wax who will no doubt get the party started.

Good Will Remedy harness all that’s good from country, alt country and rock -and mix it all together in a southern fried feel-good alt Countryesque Americana style all their own.

Plus Logan legends, Stayplton Street and up and coming rising country star, Briana Dinsdale opening up for what is set to be an incredible day of live music, great friends and a festival that Logan can truly call their own!

Getting to the event couldn’t be easier! Just jump on a train on the Brisbane-Gold Coast Line direct to the Kingston Train Station which backs on to the venue. Show your Melting Sunsets ticket for FREE train travel, thanks to Logan City Council and Queensland Rail.

Don’t miss out! Grab your tickets, your mates and your picnic blanket for a day to remember at Logan’s new home of Live Entertainment, the Kingston Butter Factory